My daughter does a lot of painting, and although she has not had any formal training, she’s really quite good. I got inspired by some of her works and wrote this music to accompany a slideshow of her works.

A set of Jazz Ballads and Bossa Novas for all those hunkered down and “Social Distancing.” 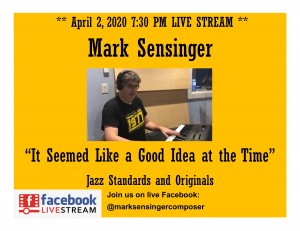 On April 2, 2020 at 7:30 pm I will be doing a live stream of jazz standards and original works on Facebook.  To join the stream, go to www.facebook.com/marksensingercomposer.  Hope to see you there!

For the last few weeks I’ve been building a SharePoint site for my group at work.  Wrote this little ditty to play on a loop at the welcome page. Enjoy!

This is the first in my series of what I’m calling “Art Songs”.  Taking a cue from Charles Ives, these are piano and vocal pieces, the text being various pieces of poetry set to music.  The text for this piece is an example of “found” poetry which poet Rosemary Waldrop came across in The Joy of Cooking and arranged as verse:

Abalone, like inkfish,
needs prodigious pounding
if it has died in a state
of tension. 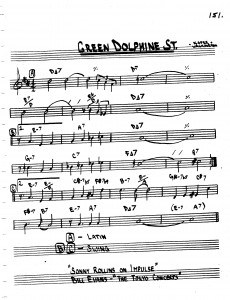 Four Musical Observations From My Daughter’s Dance Recital (or: How to ruin it for everybody else)